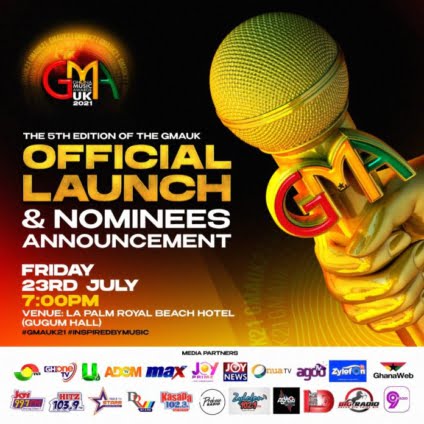 Ghana Music Awards UK is set to launch its 5th Edition with unveiling of nominees who made it to the final list for the year’s anniversary edition.

The event which is aimed at recognising Ghanaian creative works in music and culture, is scheduled to come off on July 23, 2021 at the La Palm Royal Beach Hotel in Accra at 1900 hours.

Also in support are Onua TV and TV3 Ghana which are under the Media General Group.

About the Ghana Music Awards UK

It is largely a people’s choice awards scheme that seeks to champion and expand the development of the Ghanaian music industry both home and abroad, into an international market for global recognition of Ghanaian creative works.

The scheme is established to create an open market for collaboration, sales, new music trends, cultural exchanges, marketing opportunities and several benefits to be accessed by Ghanaian musicians in the United Kingdom.

The scheme is also to appreciate those working in the music industry who have released works that have generated the wildest public excitement within the specified period with an amazing stage craft for world class entertainment.

As an award scheme, the GMAUK recognises the hard work of our veteran musicians who have contributed immensely to the development of the arts over the past years, and for reasons are not active in the filled of work to compete and are referred to as the veterans.

The expectation of the organisers of the scheme is to make the GHANA MUSIC AWARDS UK brand the biggest music festival to be held yearly in the United Kingdom to award excellence and creativity and give an equal opportunity for Ghanaians in the diaspora to compete with their local counterparts on one platform of excellence.

The programme is an annual event put together by Mr. Nii Ofori Tackie-Tetteh and Emmelio Tetteh, who own Alordia Promotions & West Coast UK respectively. These two UK top event organisers have set out an agenda to create the biggest music platform for music industry practitioners in the UK and for business people to network and interact especially in the field of promoting our rich Ghanaian culture and business.

The scheme offers several Ghanaian entrepreneurs a platform to be part of a one-day exhibition from music, artworks, clothing, food and several indigenous contemporary Ghanaian dishes.

A list of high profile celebrities and personalities within the industry and other dignitaries attend the event. The event has been designed to demonstrate a rich culture with a colourful exhibition of what defines the story of Ghana music from the traditional Adowa and kpanlogo, Highlife, Burger Highlife, Hiplife , Afro beats, Reggae/dancehall and Gospel.